Uzbekistan has set a goal to increase the share of renewable energy sources (RES) to 25% by 2030 in the total volume of electricity production, today this figure is 10 percent. To achieve the intended results, the Ministry of Energy of the Republic of Uzbekistan is taking active measures to implement large projects in the field of renewable energy sources. Within 10 years, it is planned to build solar power plants with a total capacity of 5000 MW and wind farms with a total capacity of 3000 MW. To this end, the Ministry of Energy, with the assistance of the World Bank, the Asian Development Bank and the European Bank for Reconstruction and Development, is currently carrying out a set of measures for the competitive selection of investors for the implementation of these projects, which will be carried out through foreign direct investment. 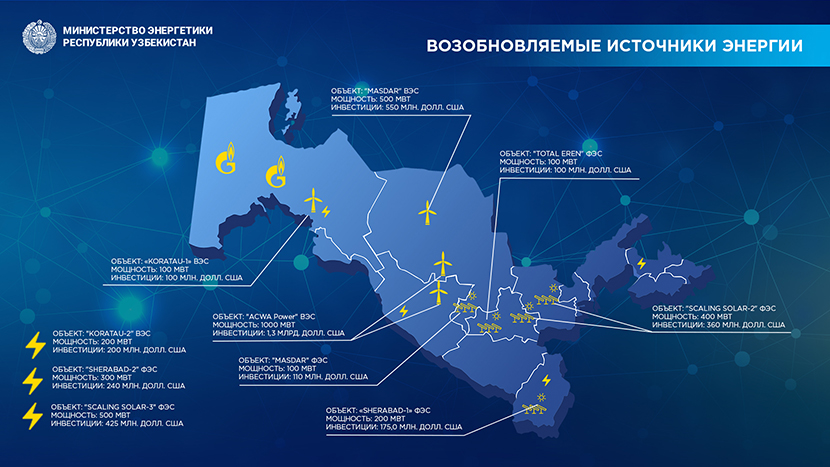 By the end of 2021, it is planned to commission two photovoltaic (solar) power plants in Uzbekistan, 100 MW each. In this direction, the Ministry of Energy of the Republic of Uzbekistan with the participation of the International Finance Corporation (IFC), a member of the World Bank Group, is implementing the Scaling solar II project for the construction of photovoltaic (solar) power plants on the basis of a public-private partnership program. IFC has been hired as a lead consultant to help structure and tender for solar projects. In 2019, in Uzbekistan, with the support of IFC, the first stage of international tenders was held, the results of which were announced on October 4. The tender was held for the construction of the first 100 MW PV power plant in the Navoi region. 23 companies from China, South Korea, Japan, Saudi Arabia, UAE, India, South Africa, Russia, Spain, Norway and France took part in the first stage of the international tender, of which 11 companies passed the pre-qualification selection.

Bids were submitted by five companies: Acwa Power (Saudi Arabia), Jinko Power and Aljoimah Energy & Water Consortium (PRC / Saudi Arabia), Masdar (UAE), TBEA Xinjianing Sunoasis Co Ltd (PRC) and Total Eren (France). Based on the results of studying and evaluating the technical and commercial proposals of the applicants, Masdar (UAE) was declared the winner of the first stage of the international tender by the tender commission with a tariff of 2.679 US cents per 1 kWh of generated electricity and a construction period of 12 months. According to UAE experts, the solar power plant will produce 260 million kWh of electricity per year.

Since the beginning of this year, work has been underway to organize the second stage of tenders for this project. Within the framework of “Scaling solar II”, a tender was announced for the construction of two photovoltaic stations (PVPs) with a capacity of 200 MW each in the Samarkand and Jizzakh regions of Uzbekistan. 83 companies and / or consortia submitted applications for participation in the tender, which proves the strong growth of investor interest in the implementation of Uzbekistan’s renewable energy projects. In addition, the geography of the competition participants expanded, including new companies, including those from European countries. Given the effectiveness of the first tender, it is expected that the results of the second will significantly increase the number of participants, which will make it possible to achieve even greater tariff reductions. Renewable energy sources are one of the priority directions of energy development in Uzbekistan.