Uzbekistan, the 6th largest cotton producer, was the 3rd largest exporter of cotton, but in recent years has been reducing the export of raw cotton, focusing on the export of high value-added products.

textile-garment and knitwear industry is a strategic sector for the economy of Uzbekistan, providing a high level employment of the population, contribution to the economic and industrial potential and the international prestige of the state. The unique geopolitical position of Uzbekistan makes it possible to be in direct economic dialogue with many countries and to pursue mutually beneficial business cooperation with both the countries of Europe and Asia.

Light industry is developing year by year. Introduction of new production technologies, the use of high-performance, modern equipment, combined with efficient management, ensures high productivity of labor at enterprises in the industry, and an increase in industrial production. The Republic, which has long exported only cotton fiber, today has unlimited opportunities for gaining leading position in the global textile market, not only as a supplier of cotton fiber, but also as an exporter of textile products, especially finished products.

Light industry of Uzbekistan is one of the leading and dynamically developing industries. According to the State Statistics Committee, in 2017 the industry accounted for about 30% in the total industrial volume of the country, its share in GDP was about 4%, and in the production of non-food consumer goods – more than 44%. The annual growth in the industry’s output in recent years has amounted to about 18%, and exports – 10%.

Uzbekistan is one of the world’s largest producers of natural textile fibers, cotton yarn and knitwear. In the republic there are more than 7,000 textile enterprises, the annual capacity of which is: 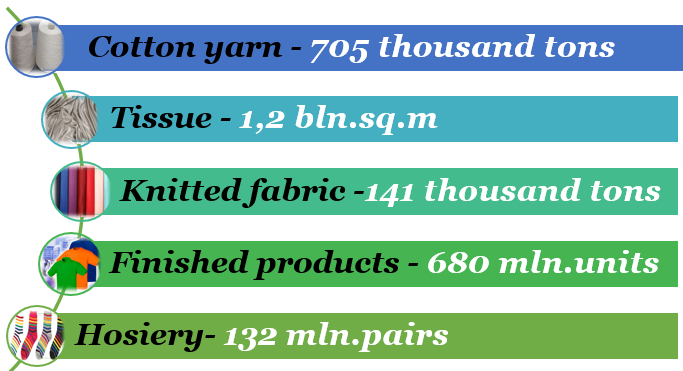 The Decree of the President of the Republic of Uzbekistan of 14.12.2017. No. DP-5285 provides for liquidation of JSC “Uzbekyengilsanoat” and creation of “Uztuqimachiliksanoat” (Uzbekistan Textile Industry) Association. These reforms and the correctly chosen strategy and competent management of “Uztuqimachiliksanoat” Association allowed domestic textile companies to demonstrate positive growth dynamics. Today, the Association unites over 1,600 major manufacturers in the textile market in Uzbekistan, which account for a substantial part of light industry production, in particular, the processing of 706 thousand tons of cotton fiber and production of 510 million square meters of fabrics of various assortment, including:

At the same time, 300 textile companies were created with participation of foreign investors from such countries as  China, South Korea, Russia, India, Singapore, Germany, Switzerland and others.

The largest increment of value added in the chain of production of the textile industry from cotton is in the sphere of sewing knitwear and garments.

Based on the importance of the textile industry for the economic development of the country, Uzbekistan is implementing a Program of measures for further development of the textile, garment and knitwear industry for 2017-2019. According to the Program, by 2020 the production of cotton yarn is planned to increase by 2.5 times, finished fabrics – by 2.8 times, silk fabrics – by 2.7 times, nonwoven materials – by 1.5 times, knitted fabric – by 2, 7 times. It is planned to increase the output of garments by 3.2 times, knitwear by 2.1 times, production of raw silk by 2.1 times. If the volume of fabrics production in 2011 amounted to 85.63 million square meters, in 2020 this figure will exceed 459.2 million square meters, ensuring a growth in production by 5.4 times.

In 2017, textiles worth almost $1.2 billion were exported. And this is despite the fact that during the crisis, prices for raw materials and main types of textile products fell significantly.

The nomenclature of textile exports is:

The share of cotton fiber processing by domestic consumers reached up to 50% of the production volume.

Modern textile enterprises have been commissioned, including dyeing, finishing, knitting and sewing production.

As a result of low level of raw material processing, the export of textile products in Uzbekistan is insignificant. If in 2016 the volume of export of textile products of the republic was 1 billion 146.5 million USD, then China exported textiles for 104.6 billion USD, Turkey – for 10.9 billion dollars, India – by 16.2 billion dollars, Bangladesh – by 1.76 billion dollars, Pakistan – by 7.68 billion dollars. For 2012-2016 export growth in the textile industry (excluding cotton fiber) amounted to 132.5%. The share of exports in the total volume of commodity products in 2016 amounted to 40%. As a result, despite the fact that the share of Uzbekistan in the global production of cotton fiber is 3.6%, its share in the global production of fabrics, finished knitwear and garments is much lower.

For 15  years, within the framework of implementation of 300  investment projects, about $2.5 billion USD were attracted in the textile industry, including over the last 3 years – 575.3 million dollars. Over 80% of attracted foreign investments accounted for countries such as  China, South Korea, Switzerland, Singapore, the United Kingdom, Germany, India and Turkey.

Indicators of technical equipment of industrial premises increased. More than 1.6 million spinning spindles were put into operation, 100 thousand chambers, which accounted for 89.3% of the existing park of technological equipment.

What privileges and preferences are provided for enterprises with foreign investments

For stimulating and increasing production for export in the republic, an integral system of tax benefits and preferences for enterprises-exporters has been created.

Turnover on the sale of goods (excluding precious metals) for export for foreign currency is subject to zero-rate VAT.

For exporting enterprises (excluding the sale of commodities) the tax rates on profits and property decrease depending on the share of exports of goods (works, services) of own production for FCC in total sales: with a share of exports from 15 to 30% – by 30%; with a share of exports of 30 percent or more – by 50%. In the same volumes, the single tax rate for micro firms and small enterprises is reduced. In addition, micro firms and small enterprises are exempt from the mandatory sale of 50% of foreign exchange earnings from the export of goods (works, services) of their own production. This allows directing foreign exchange funds remaining at the disposal of enterprises to strengthen and effectively develop their production.

An additional impetus in development of the export potential of the textile industry became the norm, according to which, until January 1, 2016, the textile enterprises of the republic that sell 80 percent or more of their products, including semi-finished products (yarn, fabrics, knitted fabric and cotton spinning waste) for FCC are exempt from property tax.

Since August 2011, new customs clearance rates have been approved for the export of goods, which have been reduced by at least 2 times on average against those existing before that time.

Much attention is paid to enterprises with foreign investments engaged in export-import operations. In particular, paragraph 9 of the Decree of the President of the Republic of Uzbekistan of January 10, 2012 for No. DP-4434, they were granted a number of benefits and preferences.

Thus, enterprises with foreign investments independently carry out export-import operations in compliance with the requirements of the legislation of the Republic of Uzbekistan. Moreover, the export of products of own production is not subject to licensing and quoting. As well as, this category of business entities has the right to import products without a license for their own production needs, in accordance with the legislation of the Republic of Uzbekistan.

In accordance with the Tax Code of the Republic of Uzbekistan, enterprises that attract foreign direct private investment, specializing in manufacturing products in sectors of the economy according to the approved list, are exempt from: income tax on legal entities; property tax; tax on improvement and development of social infrastructure; single tax payment; mandatory contributions to the Republican road fund.

a) are provided when the volume of private foreign direct investment is equal to (equivalent):

At the same time, if the enterprise using the benefits during the period of application of benefits, the share of a foreign investor decreases below 33 percent in the authorized capital of the enterprise, if the amount of direct private investment made is not reduced, as well as other requirements established in this Regulation for such enterprises is preserved.

The resolution, issued at the end of 2016, reflected the intention of the country’s government on strengthening the policy of attracting foreign investors in the textile industry and opened up great opportunities for export. From January 1, 2017:

— the mandatory sale to the authorized banks of part of the proceeds from the export of non-food consumer goods is canceled;

— textile enterprises are exempt from customs duties (except for customs clearance fees) for imported technological equipment and components that are not produced in the territory of the Republic of Uzbekistan. This will help to modernize production equipment;

— manufacturers of textile products are exempt from paying taxes on profits, property and single tax payment of micro firms and small enterprises, as well as mandatory contributions to the Republican Road Fund. It is planned that savings will also be aimed at improving the technological equipment of enterprises of the textile industry;

— marketing, information and consulting services will be provided to light industry enterprises, including small business and private entrepreneurship. In other words, we can expect support in organizing promotional events, presenting export potential at international exhibitions and in print media.

— it is planned to promote products of light industry enterprises under direct contracts through trading houses abroad.