On October 24 of this year, in the format of a video conference, a discussion was held on the progress of the implementation of tasks to strengthen trade, economic, investment, financial, technical, transport, logistics and cultural and humanitarian cooperation with the People’s Republic of China and the Republic of Korea, identified during an expanded video conference under the leadership of the President of the Republic Uzbekistan, held on October 14 this year.

Heads of ministries, departments and industry associations took part in the discussion, which was led by Deputy Ministers of Investments and Foreign Trade A. Voitov and L. Kudratov.

A revision of projects planned for implementation together with Chinese and Korean partners and an analysis of the state of their implementation were carried out. Also, a detailed analysis of a number of projects was carried out, for which there is currently a lag behind the implementation schedule, as a result of which algorithms were developed for solving existing issues, indicating specific time frames for resolving problems and imposing personal responsibility on the heads of the relevant ministries and departments. 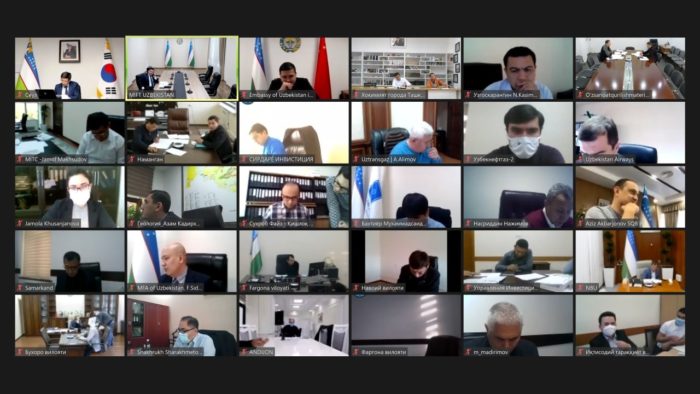 The need to organize close interdepartmental cooperation in the implementation of the tasks set by the Head of State was emphasized. In this regard, an order was given to create a special working group composed of the heads of the relevant departments of the relevant ministries and departments. The task of this working group will be practical work to accelerate the implementation of projects and initiatives with Chinese and Korean partners.

This approach is a prerequisite for achieving the targets of cooperation with the PRC and South Korea determined by the Head of State – by 2025, the annual volume of investments from the PRC is planned to reach $ 5 billion, and from the Republic of Korea – up to $ 1 billion. At the same time, the volume of annual exports to China by 2025 should amount to at least $ 3 billion, and to the Republic of Korea – at least $ 800 million.

As a result of the discussion, executives were given additional targeted instructions to study all joint projects, prepare updated roadmaps for their accelerated, high-quality and timely implementation, as well as develop new promising programs for the next year. In order to ensure effective monitoring of high-quality and timely execution of the instructions of the Head of State, discussions in this format will be held on a regular basis.