On January 27, President of the Republic of Uzbekistan Shavkat Mirziyoyev held a meeting to discuss the organization of the Tashkent International Investment Forum due in March.

In recent years, the investment climate in our country has improved significantly. The legislative framework of the sphere has been updated, legal guarantees for investors have been strengthened.

The influx of investment considerably increased last year – in the Year of Active Investments and Social Development. Thus, the volume of foreign direct investment amounted to $ 4.2 billion, which is $ 3.1 billion, or 3.7 times, as much as in 2018.

During his Address to the Oliy Majlis last week, the head of state noted that an active investment policy will be consistently continued this year in order to develop the economy at a fast pace, and that a significant portion of investments assimilated in 2020 will be foreign direct investment and loans.

In particular, it is planned to attract $ 5.8 billion of foreign direct investment in the economy of our country this year. The Tashkent International Investment Forum would serve this end.

The main goal sought from the forum is to attract foreign direct investments in the ‘driver’ sectors of the economy like energy, engineering, electrical engineering, information technology, textile, agriculture and food industries, construction sector, as well as in the regions of the country.

The meeting participants identified specific tasks for holding the event at a high organizational level.

In particular, the Ministry of Investment and Foreign Trade has been instructed to prepare, together with regional leaders, presentation materials on promising projects to be offered to foreign investors. 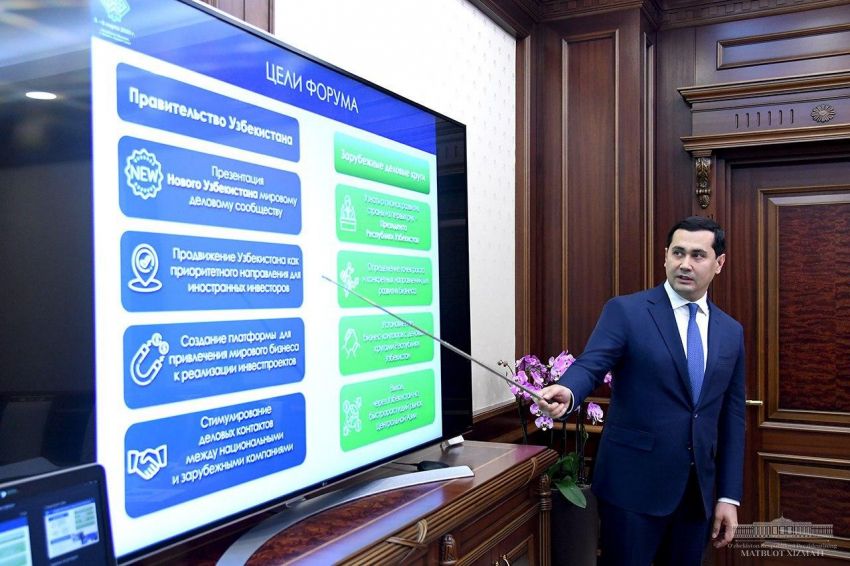 The President stressed the need to pay special attention to establishing direct partnership between local producers and foreign investors in implementing regional programs.

The Ministry of Foreign Affairs has been tasked with inviting representatives of leading foreign companies, international financial organizations and the media to the forum.

The meeting participants discussed issues related to the high-quality grounding of premises for the occasion, along with extensive promotion and coverage of the forum in the media.

Responsible officials reported on the preparations for the event and the expected agreements and deals.