As part of the speech by the President of the Republic of Uzbekistan Shavkat Mirziyoyev at the 75th session of the United Nations General Assembly, the head of state put forward an initiative to create a Regional Center for the Development of Transport and Communication Interconnection, under the auspices of the United Nations.

The report of the head of state especially noted that fundamental changes are currently taking place in the Central Asian region, a common achievement was the regular Consultative Meetings of the Heads of State of Central Asia, the initiative to hold which was first put forward at the 72nd session of the UN General Assembly.

Thanks to the well-established relationships, over the past four years, the volume of mutual trade between Uzbekistan and neighboring states has grown almost five times.

And today the Central Asian states are facing an important strategic task – to ensure the deep integration of our region into global economic, transport and transit corridors.

In this regard, it is proposed to establish a Regional Center for the Development of Transport and Communications Connectivity under the auspices of the United Nations.

Also, from the side of the President, it was proposed to hold an International Conference on the results achieved and prospects for interaction within the framework of the regional Joint Plan for the implementation of this Strategy, adopted 10 years ago. 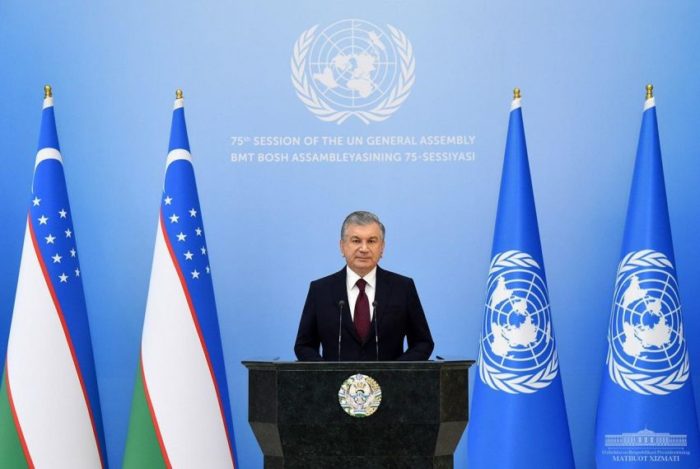 Photo credits: Press Service of the President of the Republic of Uzbekistan