ГлавнаяMedia centerNews and eventsInfographics: Trade and economic cooperation between Uzbekistan and France
The Center for Economic Research and Reforms analyzed Uzbekistan’s trade with France and identified the most promising areas for further expansion and increased export volumes. 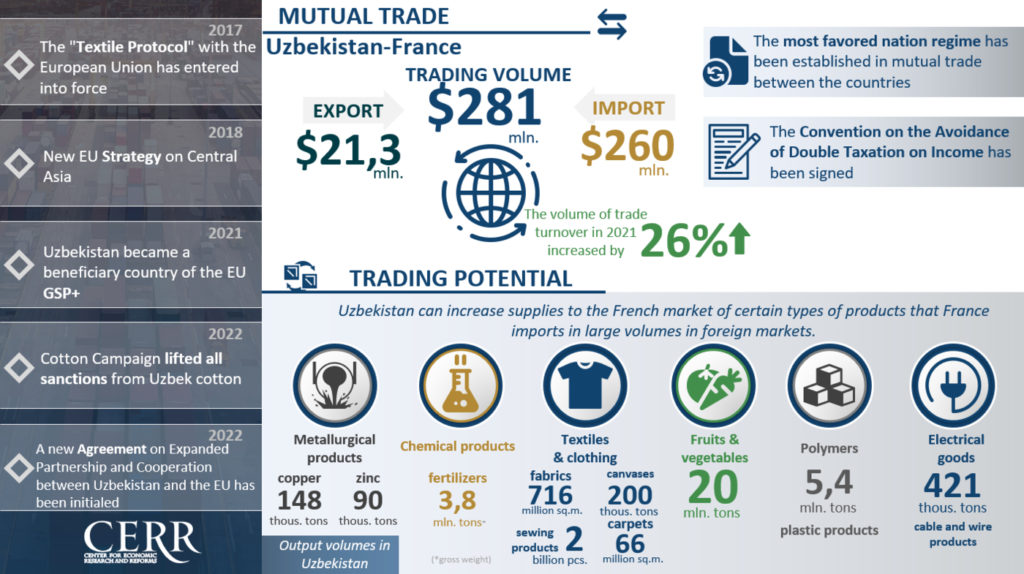 At the invitation of French President Emmanuel Macron, President of Uzbekistan Shavkat Mirziyoyev is on an official visit to this country on November 21-22.

During the visit of the President of Uzbekistan, Shavkat Mirziyoyev, to France, it is planned to sign 14 documents on cooperation in the field of education, science, cultural heritage, civil aviation, public service and the fight against corruption.

On the eve of this event, the Center for Economic Research and Reforms (CERR) prepared infographics that present an analysis of the development of Uzbekistan’s foreign trade relations with France over five years and the trade potential of the two countries.

In recent years, there has been a consistent strengthening and expansion of Uzbek-French cooperation. The current dynamics positively affect the deepening of trade and economic relations within the framework of cooperation between Uzbekistan and France.

Following the results of the first official visit of the head of Uzbekistan to France in October 2018, 10 documents were signed on road transport, tourism, military-technical cooperation, space exploration, financing of investment projects, culture and other spheres. At the same time, the companies of Uzbekistan and France signed agreements on investment projects worth 5 billion rubles. euro.

Thus, all conditions were created for further effective cooperation.

Over the past 5 years, the trade turnover between Uzbekistan and France amounted to $1.43 billion. and it grew from $257.2 million in 2017 to $280.8 million in 2021. There was a decrease in exports to $670.9 million. At the same time, the volume of imports increased 2.4 times to $259.9 million, in particular, due to the purchase of aviation equipment, necessary machinery and equipment, pharmaceutical products, medical equipment, etc.

According to estimates, due to Uzbekistan receiving the GSP+ beneficiary status in 2021, there was a moderate increase in exports of fruit and vegetable products, in particular nuts, textile products, carpets, and certain types of electrical products.

Despite a certain imbalance in our trade relations, the trade turnover between Uzbekistan and France has grown by 10% over the past five years. There is significant untapped potential in trade and economic cooperation.