The Embassy of Uzbekistan in Seoul organized negotiations via videoconferencing between First Deputy Chairman of the Uzeltekhsanoat Association Mansur Khoshimov and Senior Executive Director of Dong-A Electric Company Kim Tae U. The meeting was also attended by senior officials from the Ministry of Investment and Foreign Trade of Uzbekistan. 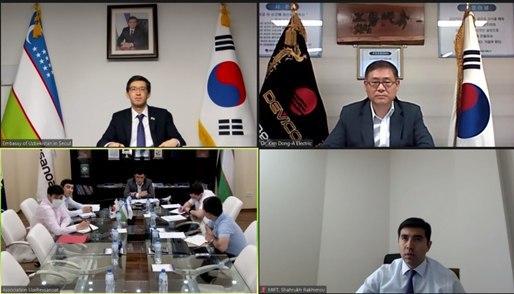 It was emphasized that there are all the conditions for organizing this production in Uzbekistan – a rich raw material base, highly qualified specialists, a favorable investment climate, market volume in the country and neighboring countries. The Dong-A Electric company is ready to provide its modern technologies to establish the production of finished products in Uzbekistan with high added value.

The parties reached an agreement to continue the active exchange of information and conduct the next negotiations in the online format.