New investments of “Masdar” in the energy sector of Uzbekistan

On July 12 2021, the ceremony of signing Investment Agreements with the UEA company “Masdar” took place in Tashkent on the basis of a public-private partnership. The organization is investing up to $ 300 million in the construction of 2 photovoltaic stations with a capacity of 220 MW each in Samarkand and Jizzakh regions respectively.

The signing ceremony was attended by Deputy Prime Minister – Minister for Investment and Foreign Trade of the Republic of Uzbekistan S.Umurzakov and a CEO of “Masdar” Mohamed Jamil Al Ramahi, as well as the Ambassador Emirates in Uzbekistan Said Matar Al Qamzi. 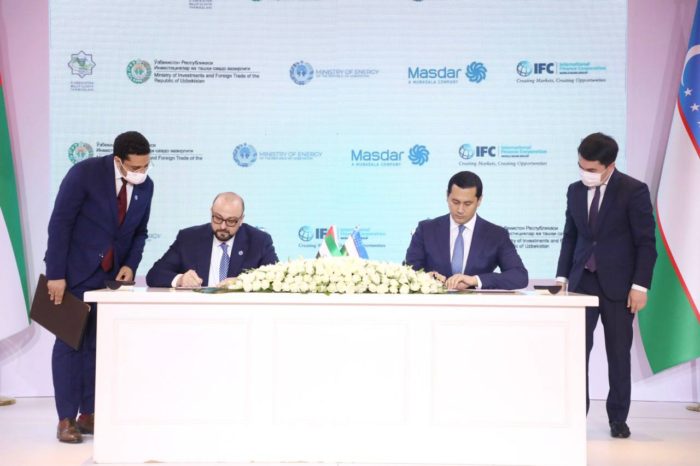 These tariffs were included in the top 10 lowest world prices for electricity generated by photovoltaic plants.

More than 80 leading international companies have expressed interest in taking part in the tenders for the two mentioned projects, which demonstrated the increased interest of the foreign business community in investing in the country’s energy sector.

15 companies, including such leading international companies as ACWA Power (Saudi Arabia), Total Eren and Total Solar Intl (France), KEPCO, KIND and Samsung C&T (South Korea), Jinko Power, Powerchina Resources and Risen Energy (PRC) have passed the first stage of the tender. Of these, 7 companies were selected to submit proposals for electricity tariffs for a project in Jizzakh region and 6 companies for a project in Samarkand region.

These projects are part of a public-private partnership tender program for the construction of photovoltaic plants in Uzbekistan with a total capacity of 1 GW, which is being implemented by the Ministry of Investment and Foreign Trade in conjunction with the Ministry of Energy. The International Finance Corporation (IFC) provides technical support to the program.

The program is one of the key components of the strategy of the Government of Uzbekistan to introduce renewable energy sources and bring their share in the total generated capacity to 25% by 2030.

For reference : “Masdar” is a subsidiary of the investment holding ” Mubadala Investment Company” and one of the leading international companies in the development of renewable energy sources in the world. The portfolio of completed investment projects of the company includes more than 4,000 MW of installed capacity for generating electricity from renewable sources.