In 2021, commercial banks are planning to finance investment projects in the amount of 120 trillion soums

ГлавнаяMedia centerNews and eventsIn 2021, commercial banks are planning to finance investment projects in the amount of 120 trillion soums

Upon his return from Jizzakh region, President Shavkat Mirziyoyev got briefed about the course of execution of investment projects and plans of work on prospective ones. The first stage of presentation exposed major investment projects that commercial banks of the country intend to implement in 2021.

Systemic efforts are undertaken in Uzbekistan to promote the production of export-oriented and import-substituting goods with the application of modern technologies. To this end, commercial banks are planning to finance investment projects in the real economy for a total of 120 trillion soums.

In addition, 14 big investment projects worth about $ 1 billion have been worked out for the building materials sector, textiles, agriculture, petrochemical industry, mechanical engineering and other areas. 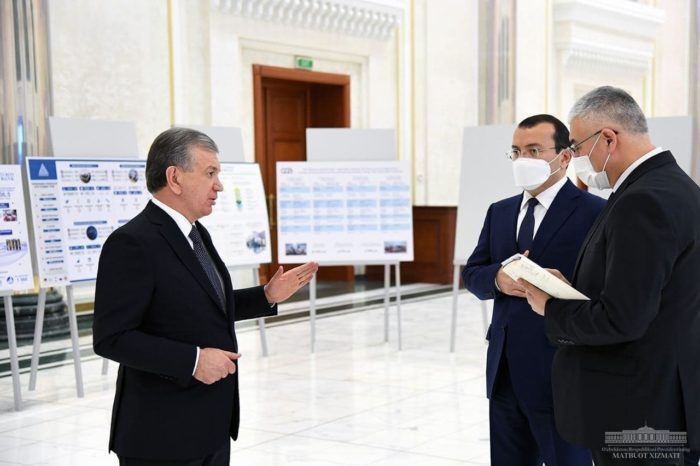 Thus, in the city of Syrdarya, a project was launched towards the production of plastic bags and flexible containers, which has resulted, inter alia, in the creation of 2 thousand new jobs. In continuation of this, Uzsanoatqurilishbank eyes a 94-million-dollar project for the production of spunbond-meltblown nonwovens.

In general, within the framework of projects, manufacturing special equipment, polymetallic products, geo-synthetic materials, building boards based on mineral wool, pipes, glass and other construction materials are envisaged, along with the establishment of fruit and vegetable clusters and small industrial zones.

The head of state insisted that the socio-economic potential of each region be taken into account when realizing projects, improving industrial infrastructure, setting up clusters and technology parks.

President Shavkat Mirziyoyev was also provided with information on the implementation of investment projects in the capital city. It was noted that in accordance with the program of socio-economic development of Tashkent in 2020, a total of $ 3.7 billion was spent from all sources of funding. 306 projects worth over 11 trillion soums have been executed, about 13 thousand new jobs have been created.

In particular, the limited liability company DSK Binokor in the Bektemir district has organized the production of reinforced concrete goods by attracting 504 billion soums of investments, while the Bek Mega Textile enterprise in the Sergeli district launched the manufacture of textile products through investments for 119 billion soums.

In continuation of the efforts in this direction, 1,277 investment projects exceeding 109 trillion soums have been elaborated for 2021-2023. Foreign investment and loans are expected to account for nearly $ 4.9 billion of this amount. The implementation of these projects will help create about 86 thousand jobs.

This year, $ 4.1 billion will be invested in these projects from all sources. It is planned to launch 454 projects and employ about 29 thousand people.

The President gave a number of instructions for the timely and high-quality completion of the projects reported, in accordance with requirements of the day.